Trends and Perspectives of Urbanisation in Muscat Capital Area

The book traces urbanisation patterns in Oman looking at the coastal strip of Muscat Capital Area. This metropolitan region emerged within the last 50 years almost out of nowhere and is now home of the majority of the national and expatriate population of Oman.

Urbanisation, and the socio-political, economic and environmental aspects attached to it, become an index of the radical spatial transformation of the Sultanate.

The research covers a time frame of 45 years, starting in 1970, and looks at the era being shaped by Sultan Qaboos bin Said al Said. However, there is a clear focus on the period between 2008 and 2014 to grasp the dynamics and current changes which were taking place while the research was undertaken. This called for a flexible and adaptive methodological approach. Certain shortcomings have been accepted in the quantitative data available, that would not however influence the final qualitative outcome. Thus findings are based to a considerable extent on empirical data collection within two case study areas.

PART 1 looks briefly back at the past 45 years (1970-2015) of urban development in Oman and in particular in Muscat Capital Area. Sonja Nebel and Aurel von Richthofen analyse the background and driving forces of the urbanisation  process in Oman and give an overview on physical growth patterns in Muscat Capital Area. Three decisive factors shaping urbanisation are presented in more detail.

Marike Bontenbal discusses population growth and demographic transition and their impact on urbanisation in Oman. Population dynamics as one of the drivers of urbanisation in the country are analysed by presenting an overview of major population trends, including natural population increase, international migration and rural-urban migration – that have all been important forces influencing urban growth in Oman. Underlying economic, social and cultural factors are also discussed that have led to demographic change.

Claudia Kruschwitz focuses on the road network throughout the country and in Muscat Capital Area. A brief insight into 45 years of priority given to the expansion and improvement of car-based transportation infrastructure helps understanding the urban structure that has emerged over time. She points out how the development of the Capital Area brought about a new economic basis, with new employment sectors and a new car-dependent lifestyle.

Hamad Al Gharibi explores current lifestyle patterns in Muscat Capital Area promoted by the transformation from the agro/fishing-based economy to the oil-based economy, accompanied by remarkable changes in social and urban structures. This chapter intends to visualise the transformation of socioeconomic conditions and their impact on current urban patterns. It attempts to focus on the negative aspects that might be expected if the current urban management model remains unchanged while the country moves toward the post-oil age. Nowadays lifestyle patterns of the dispersed nucleo families favour the freestanding single villa on a walled plot, and car-based mobility patterns, which both support a high consumption of limited resources.

Aurel von Richthofen presents the patterns of urban expansion that are characteristic in Muscat Capital Area. Through systematic observation and mapping over a period of 4-5 years, a typical development process of a new residential area has been documented. The predominant patterns of urban sprawl are described and impacts are analysed.

In a second chapter Aurel von Richthofen presents quantifiable parameters of urban expansion for the Al Khoud case study. This list is far from complete, but aims to present a ‘tool-box’ for research and a future sustainability model. Starting from measurable lengths and areas, ratios and densities, parameters are discussed that have long served to benchmark land use and infrastructure efficiency in urban developments.

Anne Eaton and Sonja Nebel review the transformation of house-typologies in the case study of Fanja. Until today Fanja shows the characteristic mixture of old and new buildings, and thus allows to draw a picture of changing house types, building techniques and use of material throughout the past four decades of development. The chapter reveals a clear trend of transformation in line with comprehensive societal changes and economic development. Construction techniques and the use of building materials, patterns and use of open space, and road networks have changed dramatically over four decades. Both the inhabitants of urban areas and of urbanizing rural areas are practicing nearly the same life-style patterns, to be perpetuated by a high, ill reflected consumption of limited resources.

Sara Abdelaal describes the emerging rural-urban interface, analysing interactions between rural and urban on different levels (household, local, national and international), influenced by different factors (political, institutional, social, economic and spatial). These forms of rural-urban interface are characterized by dynamic flows of people, money, goods, resources, information etc.. The prominent relation between the rural and urban in the Arab Gulf Region is changing continuously, and is mainly characterised by dependent relations of under-developed rural areas towards rapidly growing urban centres. 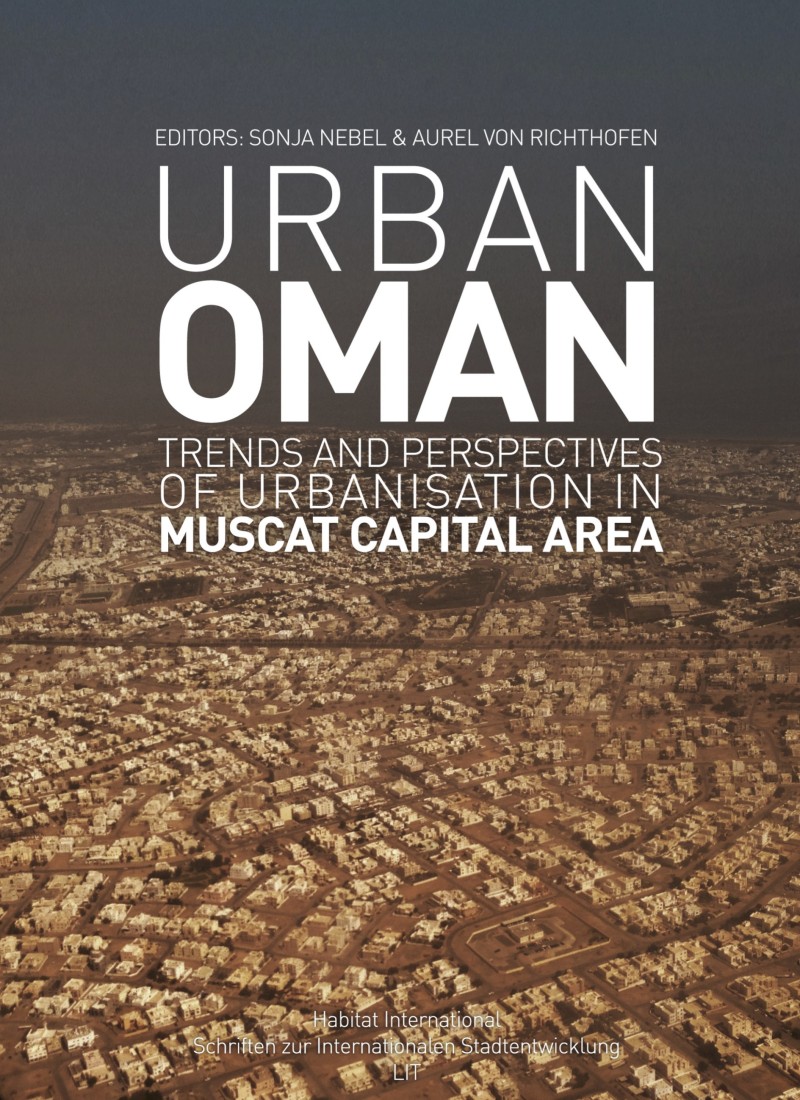 PART 3 sheds light on various issues of sustainability as discussed in a conference held in March 2014 in Muscat at the German University of Technology in Oman (GUtech), including topics such as transportation, climate-related urban design and urban governance. Examples from Morocco and Germany are related to the Omani context.

Another aspect of urban governance is tackled by Sonja Nebel, examining the issue of land management. Taking into consideration Oman’s demographic characteristics and dynamics, as well as its geo-physical setting, competing land use interests for residential use, agriculture, transport, tourism, are all focusing on just a small percentage of the country’s total available area. How to manage land use in a way that these crucial resources will last for future generations, becomes a key area of intervention for urban governance and urban planning, if future development is to be more balanced and socially inclusive. The chapter takes into consideration the Omani legal background and the methods of land allocation, relating these issues to the international discourse.

Alaa Mandour illustrates a comprehensive initiative to produce an Urban Structure Framework Plan for the evolution of the city of Muscat based on an extensive study of existing planning regulations. An Urban Structure Framework Plan is to be designed to help Muscat filter and respond to current and future development needs, establish a planning culture and introduce strong guiding principles for new development. This would include a major social, cultural and economic analysis to understand the fabric of life in Muscat, and the driving factors in the real estate sector. Future development guidelines within a structure framework could be developed with the help of the  locally adapted instrument of form-based codes, which is exemplified briefly in this chapter.

Aurel von Richthofen translates structural components of urban sustainability into a spatial concept. Urban sustainability is defined as a framework of social, economic, ecological, physical and political dimensions contributing to a lasting and resourceful urban development. All these dimensions need to be rooted in local, cultural and climatic conditions in order to be translated into an applicable model of sustainable urbanisation for the specific region. A theoretical model can be translated into a dynamic parametric urban design model, operating on the scale of a neighbourhood. The chapter presents the development and implementation of the parametric urban design model, data collection, translation and interpretation. It also presents a comparative catalogue and evaluation of models at neighbourhood scale.

Yassine Moustanjidi, Undine Giseke, Christoph Kasper, Juliane Brandt and Silvea Martin-Han raise the question of sustainably structuring the regional urban-rural relationships in the Moroccan Megapolis Casablanca into a new spatial, functional, economic and socio-cultural metabolism. High demographic pressure and rapid urbanisation left the city with considerable – and partially uncontrollable – spatial growth, fragmented spaces, substantial population growth, an increasing urban divide, failure to guarantee adequate environmental and living standards, as well as challenges posed by looming climate change and limited resources. As a resulting phenomenon of current development processes specific to megacities, Urban Agriculture (UA) is considered to present new hybrid and climate-sensitive forms between rural and urban space. An underlying hypothesis is that these reciprocal urban-rural linkages contain the potential for a qualified coexistence that could be the basis for forming sustainable climate-optimised, multifunctional urban and open space structures (productive landscapes) in order to make a long-term contribution to the sustainability of cities and the quality of life for their inhabitants. The case of Casablanca gives an inspiring view on possibilities of urban agriculture for Muscat Capital Area as urban expansion is encroaching on former agricultural land.

Laura Purnell and Lucia A. Reisch contribute by providing a brief overview of the German approach to Sustainable Development (SD) governance and looks for key factors of success and failure that could serve as benchmarks to other nations. The German government was one of the pioneers when it approved the National Sustainability Strategy “Perspectives for Germany” in 2002. This Strategy has since determined the course for sustainable development. At its centre are values such as intergenerational equity, quality of life, social cohesion and international responsibility. The Strategy’s key issues, operational targets and measurement indicators, are continuously updated and adapted to new developments, state-of-the-art research and available technology.

The Conclusions by Sonja Nebel und Aurel von Richthofen summarise key findings of the research project “Towards Sustainable Urbanisation Patterns in Oman” and the conference on Challenges of Urbanization in Arab Gulf Countries. They further translate the overall scope of sustainability to what is meant by socially and economically balanced urban development and environmental impacts in Oman, based on the awareness of limited resources to be managed carefully for future generations.

Click here to assign a widget to this area.